The SAHT is a flotation craft made from engineered fiberglass, and is easily launched from a service truck at canal side, making it quickly deployable, easily serviced, easily scalable, and modular. The SAHT produces power by using both the pressure force of water onto the face of the power rotor, while also channeling water behind the rotor, leveraging water’s weight and velocity to create deep suction. This suction-augmentation method enables access to a large reservoir of energy that is below the threshold of existing technologies, because it is able to: 1) extract very slow flows, 2) extract shallow flows, 3) extract the long sloping canal sections rather than drop zones, where all credible competitors in this resource space are focused. Competing technologies also require impoundments, severely limiting their market, their number, and their LCOE. 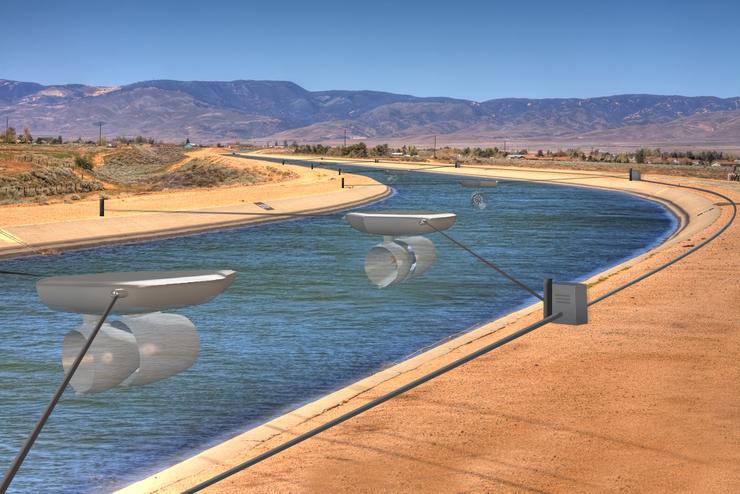 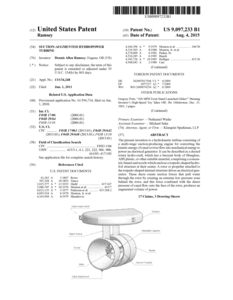 The Suction-Augmented Hydropower Turbine was patented in August 2015, and it being described as "brilliantly innovative" by industry leaders. The SAHT turbine is among the new "emerging renewables" that will be a core technology in the energy mix of the future. We feel confident that the SAHT will gain increasing market share and be widely deployed on waterway systems throughout the world. The SAHT can access energy that is below the threshold of existing low-head hydro technologies, and for this reason it will quickly develop into a new energy industry.

The SAHT’s very low cut-in speed combined with its shallow profile gives it the competitive advantage of having access to a much wider resource base within waterway systems, making its LCOE very positive, thus the SAHT’s industrial scale is potentially quite large. Arrays of SAHT turbines can be located every 100 yards along suitable canal sections, enabling the successive extraction of water’s gravity wave energy as it flows slowly to the sea. Using SAHT turbines, civilization’s waterway systems can be robotically and autonomously power-farmed for their inertial gravity energy.

Terrestrial hydrokinetics (THK) is necessarily about harvesting a small portion of the gravity energy from waterways, similar to wind energy extraction. One fact that is often overlooked about THK in canals and streams is that turbines have multiple opportunities at a plethora of locations to extract reinvested gravity energy from  the same water all along its journey. The aggregate power is substantial.

Numerous studies by federal agencies and industry groups indicate that the next wave of hydropower development will be in the Pacific Northwest on canals, rivers, and streams. Both the US Department of Energy and the Electric Power Research Institute predict that by 2025, 12.5 GW of new power will be developed on canal and river systems in North America alone using new hydrokinetic turbines such as the SAHT. The value of this power in today's dollars is over $2.3 billion annually.  In addition, the US Department of Energy estimates that up to 65GW of additional hydropower can be developed on new stream reaches and rivers in North America.

Because the SAHT is scalable and modular, and is launched from a service truck at canal side, it overcomes all of the major impediments to hydro power development on constructed waterways that water districts face in their quest to generate power within their systems. As SAHT Energy advisor Jerry Bryan states, "the SAHT could catalyze a major shift in the way hydropower production and irrigation modernization programs are funded in canal systems throughout Oregon and the world. I feel confident that water districts everywhere will be very interested in deploying SAHT turbines in their waterways as soon as it is available."

There is a nexus between water, energy, and population. Water is one of civilization’s fundamental deliverables, and is channeled into canals across most of the planet. The planetary water cycle is also accelerating due to the rise in global temperature, putting more water faster into watersheds.

It is known that the use of both water and electricity will increase with population, exponentially, and generating power from the transfer of this water, which takes place largely in canals, is a huge opportunity for hydroelectric power development comparable to wind farming.

Generating power from civilization's water while it is in transit to consumers is a huge energy prize that is waiting for the right innovation to capture. The Suction Augmented Hydropower Turbine (SAHT) presents a unique opportunity to generate industrial-scale power within this nexus, while being environmentally benign. The concept of suction-extraction of water's gravity wave represents a transformative approach to efficiently, economically, and sustainably developing this new energy resource. The SAHT provides access to energy that is below the threshold of existing technologies.