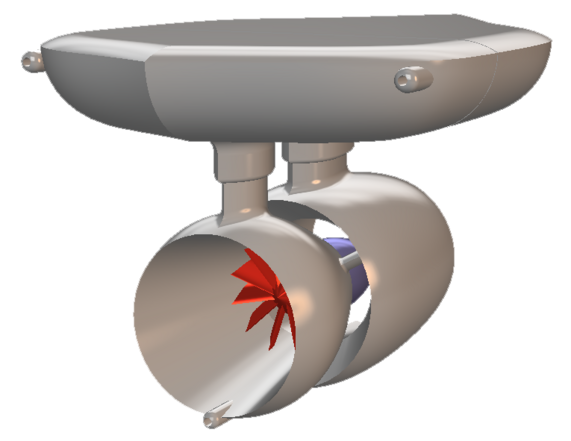 › Learn More About the Technology 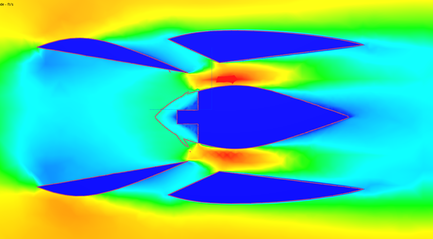 Proof-of-Concept flow studies have been completed, and we are advancing toward prototyping. The above CFD image clearly shows the high velocity that is achieved as flow enters the side duct and strikes the internal wing. This creates a deep suction vortex behind the rotor, which pulls water through the funnel and augments energy extraction.  This method employs both pressure-based physics as well as velocity-based physics to overcome the difficulties of generating power on slow-moving waterways.

At SAHT Energy we're developing the Suction-Augmented Hydro Turbine. This innovative new turbine can revolutionize the hydropower industry by adding huge new capacity, and requires no civil works to deploy.

Suction-Augmentation is a game-changer for low-head, low-impact hydropower because it enables any canal or river to generate power immediately with no need for complicated infrastructure, or large loans for development. The SAHT will create a new energy industry comparable to wind farming by generating industrial-scale power on canals and rivers worldwide.

A new innovation in hydro power designed for canals and rivers. Creates deep suction, providing access to energy that is below the threshold of existing technologies.

The EPRI publication Assessment of Water Potential and Development Needs, table 5-1, states the estimated hydropower gains by 2025 from hydrokinetic turbines on “natural waterways” to be 11 TWh/yr in the Pacific Northwest alone. The market size on canals and waterway systems is estimated at double this power, due to the ease with which turbines can be deployed along man-made waterways, and because of the tremendous volume of water transiting civilization's waterway systems. Water is one of civilization's fundamental deliverables, and is supplied in canals across most of the planet. There are potentially up to 50GW of developable power on canal systems in North America alone.

Terrestrial hydrokinetics (THK) is necessarily about harvesting a small portion of the gravity energy from waterways, similar to wind energy extraction. One fact that is often overlooked about THK in canals and streams is that turbines have multiple opportunities at a plethora of locations to extract reinvested gravity energy from the same water all along its journey. The aggregate power is enormous.

The market for electrical power is vast. Currently, megawatts of electricity sell for about $25 wholesale. The potential value of 11 TWhrs is annually over $1.5 Billion. The international market is many times larger.